I got back to the UK the weekend just gone from a 2 week work trip to North America. Running while away on business is always interesting as I love being able to get out and explore new places, and this enables you to cover more distance/areas than if you just walk (and you miss lots if you drive everywhere I find!). It also makes planning marathon training a bit more challenging!

The trip was pretty varied, starting off with a week in Houston, Texas, where the temperatures were nicely in the range of 15-25DegC, before flying up to Calgary, Alberta the second week, with a overnight excursion to Edmonton (3hrs drive north). The temperature differential was stark, from +25 in Texas to hovering around freezing in Canada, there was even snow...

Houston involved mostly running from my hotel to the approx 3 mile running loop at Memorial Park, which is very popular with Houstonians, as most of the city is dominated by cars and quite frankly a bit rubbish for running in! The track circles a golf course/parkland and is hard pack gravel. It makes a perfect marathon training circuit, plus there are lots of other runners so the atmosphere is great :-) There is also a local trail running club which meets in the park to run offroad, the Houston Area Trail Runners (http://www.trailrunninghouston.com/), but I didn't get a chance to meet up with them on this trip.

The run below is typical of the "Sub Lactate Threshold" work I've been doing in this springs marathon training campaign. It consists of 10mins Easy running followed by 70mins at "SubLT" heartrate (approx 155-160 for me currently) and a short cool down. More on the general training approach I am using in the near future.....Note for this run I was coming straight from a work meeting, so just drove to the park and started on the running track (saves the 2 miles of concrete sidewalks and busy intersections from the hotel!)

I also got the chance to explore the pathways and trails along the Buffalo Bayou slightly further out to the west of the city. This was pleasantly surprising as along side the tarmac bike path that runs the length of the Bayou, there is also an decent amount of lovely dry single-track trails to run on, some quite technical in places.

So on to Calgary in the second week, I had been there before so was very familiar with the extensive network of pathways along either side of the Bow River, so spent the majority of my runs doing different combos of distance/bridge crossing etc.. It was quite hard work to start with and then after a day or two I remembered that the city sits at an altitude of 3,000ft, which isn't massively high, but probably enough to be felt during exercise. Here's a on-the-run video of clips taken with my Garmin Virb Elite camera one evening, it's just a rough edit so it's a bit long, feel free to skip through!

Towards the end of last week I then drove up to Edmonton for an overnight stay. It was a bit colder in Edmonton (-5 or so in the mornings) and there was quite a bit of snow on the uncleared pathways by the North Saskatchewan River (which was frozen over). It took a bit of getting use to running on snow and ice! I did another run vid with the Virb camera, this time with some of the HR/GPS data it records overlaid on top.
Apologies for the shakiness of the footage, it was shot handheld (the Calgary one is on a telescopic pole which steadies it a lot)

On my last morning before flying home I was running down to the river in Edmonton when I came across a good 100 or so runners doing hill reps at 6:30am, turns out it was a club called the November Project (http://november-project.com/edmonton-ab-canada/) who run 3 times a week in the city, whatever the weather (down to -30C sometimes!!!). I jumped in for a single up and down, there was even someone taking pictures halfway up... 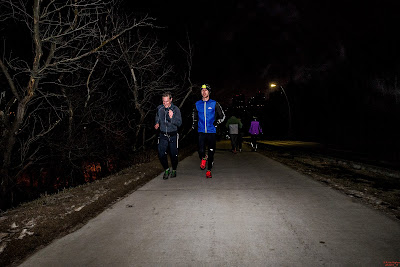 Overall a decent couple of weeks training, on the return from an ankle sprain about a month ago, with 97 and then 103 miles. Including a good sprinkling of Sub-LT workout runs (one in a 20 miler).The second week was compressed into 5 days, which wasn't great and left me pretty tired. But I assumed that with the flight home and associated jet lag that running at the weekend probably wasn't going to happen!