16 weeks of training came to ahead on Sunday 21st April with the Virgin London Marathon. As I had run a sub 2 hour 45 min time (02:43:33) in the 2012 race, I had qualified for a place on the UK Athletics Championship start for London this year. I was awake ahead of my alarm at 5:30am and was greeted by a ideal looking marathon running day, with clear skies, little wind and low temperatures. In fact it was cold enough for a spot of early frost! The forecast was for temperatures to rise to 13-14 degrees by the afternoon and the wind to fill in slightly from the south west to 3-9mph. After a spot of breakfast and final kit bag checks it was off to catch the underground from Ealing to Charing Cross followed by the train to Blackheath. 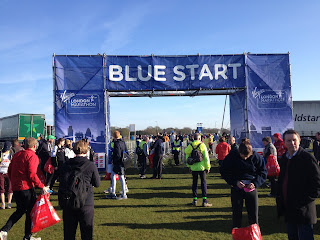 I arrived at the UKA Championship enclosure at the Blue start fairly early so had plenty of time to go through loading up my gels, doing pre-race checks and a few trips to the toilet. I could also watch the elite runners & wheelchair athletes warming up on Shooters Hill Road alongside. I met up with fellow New Forest Runners Erica Fogg and Becky Hollowbread who also had championship start places. At 9:30 it was time to put my kit bag on the truck going to the finish and do a quick warm up before the start. Just before 10:00 we were lined up just behind the elite men's field (including Mo-halfway-Farah!). Before the off a poignant 30 sec silence was held in memory of the victims of the Boston Marathon bombing which took place less than a week earlier. It was quite moving to experience the collective silence of 34,000 runners.

The hooter went and we were off. My main target for the race was to run under six minute mile pace and from my training sessions and races I felt that somewhere between 5:55 to 6:00 min/mile would be achievable in the marathon. Things felt nice and comfortable for the first few miles, which was a good sign, and I exchanged a few words with a couple of other runners I knew including John Austen Half winner Ben Evans (Guildford & Godalming) and Charlie Wartnaby (Cambridge & Coleridge AC - Charlie W on the Runners World Sub-3 forum).

The most important factor to start with was to ensure I kept the pace under control for the initial part of the race. Despite trying the first 4 miles were a bit faster than planned (helped by the downhill section to the Thames), so I reined the pace in a bit going through Greenwich. The first 5k was covered in 18:09 and 5 to 10k in 18:30. A few miles in, I passed a jogging Steve Way (Bournemouth AC) who had unfortunately had to pull out with a troublesome glute, a real shame considering his great training in the run up (I had taken part in the Bournemouth marathon training sessions too). Also bumped into Pete Thompson, another Bournemouth runner who I'd spent many miles chasing up and down the prom on Wednesday nights.

Around 10-11 miles, going through Rotherhithe, I got in a decent size group (including the first two ladies) going at about the same pace as me and stuck with them for a while. As we approached Tower Bridge I felt things needed to push on a bit, so moved to the front of the group and led across the bridge. The atmosphere on Tower Bridge was mind blowing, packed on both sides with supporters making a lot of noise! I came off the bridge slightly deaf in my left ear, and going a bit faster with extra enthusiasm.
Somewhere around 12 to 13 miles I was joined by fellow Runners World sub-3 forum poster Jim Sawle (aka Lucky Jim) who'd apparently been close behind me for a while and we paced the next few miles together. I went through half way in 1:17:54, a few seconds under target for a 2:36 time and it was still feeling under control. Got a great lift from my cheering family just past half way too.

The effort started to get a bit hard as I headed around the Isle of Dogs and Canary Wharf (15-20 miles) and my right inner quad (VMO) started to tighten up a bit. It had been causing a bit of trouble during training so I wasn't too surprised. The back and forth section around the offices of Canary Wharf isn't the nicest part of the course, with the tall buildings tending to funnel whatever wind happens to be blowing and multiple turns back and forth. The buildings also play havoc with GPS signals, so for a few miles most of the running was done on feel. The clock at 20 miles was showing 1:58:58 which meant I was still nicely on target. Going back past the Pickburn clan on the other side of the The Highway at mile 22, the right quad was gradually tightening up and the left one had started joined in! The final 3-4 miles were a physiological fight to maintain the pace as pain in my quads intensified, I was expecting cramp at any moment! Thankfully it didn't happen. Despite the discomfort, I managed to keep on target and passed 39 people in the last 7km with no-one over taking me.

The final section up Bird Cage Walk to Buckingham Palace was tough, not helped by mistaking the 600m to go sign for 400m! I just had enough energy left to pull out a (little) bit of extra speed for the final straight down The Mall to the finish. I finished in 2:36:16 for 89th place overall, an improvement of over 7 minutes on my previous PB (London 2012).


Video from the BBC stream of me crossing the finish line (~9:45min)

The post run recovery was a couple of pints in the sun on the pavement outside The Red Lion pub in Whitehall with a number of other runners (including a good selection from the Sub-3 forum), a very satisfying way to celebrate a great race!

Garmin GPS data from the race
Posted by Al Pickburn at 20:58