After a lack lustre Christmas Eve Parkrun (18:30, a minute down on 2 weeks previous), I was having doubts about the sensibility of the post Christmas trail 50k (Seoond Wind Running's Winter Cross Ultra), but with the option to call it quits at 30k I figured it would be a decent long run either way....

A 5am start this morning was a bit of a rude awakening to say the least and it was pretty cold to boot. This was my first 'proper' Ultra event with indoor aids stations, food (inc minces and mulled wine) so unsure of the expected routine with such things I resorted to type and just ran non-stop!

Thankfully it was just getting light as we were led out at 7:30 for the start, so no need for head torches. The race gets it's name from the shape of the course, consisting of a north, east, west & south out & back leg (if you are doing the full 45 mile version, strike the south bit for the 50k). The initial north bound section was an easy 9k along an old railway line (i.e. flat), which served as a good shakeout and left me in a group of 3 at the front, although the other two were in for the full 45 miles. It was into and out for the race HQ and on to the east leg 2.

An undulating mile or 2 later and I hit the first serious climb of the day up Old Winchester Hill on the South Downs Way. The top was reached without too much hassle and then down the other side. A bit of farmland meandering and it was up climb 2 of leg 2, a delightful chalky gully up between two fields, which left me thinking that will be fun on the way back.... Reached the checkpoint at the end of the leg and was still on sub 7:30/M av pace and feeling pretty good. Turned around and was pleasantly surprised by the gap back to the 2nd place runner which was up to a couple of minutes. The return run was uneventful, although by the the time I can down off O' Winchester Hill my feet were beginning to sting with hotspots quite badly and there was the definite possibility of a decent blister forming on my left ankle... non-stop through race HQ again and out on to the last leg.

The pace had crept above 7:30 by this point and I was wondering what I would be able to sustain from 19 to 31 miles. A quick jog through he village of Meonstoke and then it was on to the piece de resistance of the course, a 2km uphill drag on tarmac to the top of Beacon HIll. It was head down and work time! By the top my upper legs were giving me a lot of gyp, but I carried on, getting close to "one foot infront of the other" mode. The next 4 or so miles undulated along farmtracks and road and I just tried to ignore the pain in my feet and hip flexors.

The final checkpoint, with 6ish miles to go eventually appeared and turning back revealed that the next runners were in sight (but I neglected to note if they were 45M or 50K entrants). This spurred me on, although my legs didn't really respond to any requests for acceleration... A great aspect of the race was that you pass a lot of the other runners as you come back towards HQ, which proved much needed motivation and support.

By the time I reached the start of the descent back to Meonstoke from Beacon Hill, I was past caring about whether I could hold on to first place, I just wanted to stop running! I got back the hill with no issues, but there was one final stumbling point, the only stile on the whole course, strategically positioned with half a mile to go. My quads had nearly cramped up climbing over it on the way out and I was praying they would play ball on the way back too. Thankfully my left quad almost went, but I straightened it just in time to save a painful hobble to the line!

At this point I was happy that the win was in the bag and as an added bonus the whole family (parents included) were waiting just before the finish to loudly encourage me on. Over the line in 4hrs 7mins to take the overall 50k win (and default course record, only because it was the inaugural race!). Took a while to get changed as my legs and feet were in a bit of a state, prize giving was quick and then it was off for a dirty great big burger and pint of ale in the village pub to refuel. Overall a great event and really well organised. Think I'll have a day off tomorrow though. 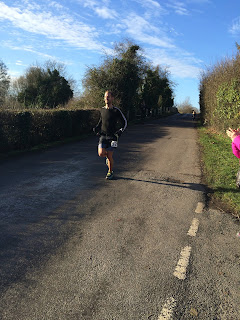 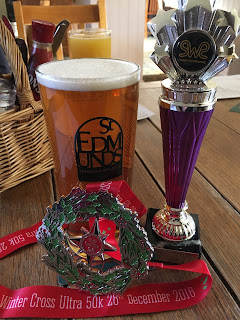 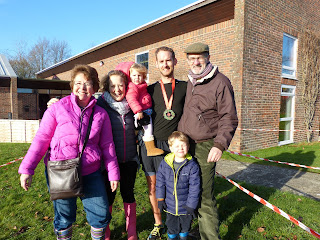