May, a Busy Month Post Marathon!....and a Special Annoucement

I've had a busy 6 or so weeks since the fun in the blistering (!) heat of the London Marathon.

Only 10 days after the marathon I was lining up in the New Forest for round #2 of the summer RR10  Hampshire running clubs XC series at Stoney Cross. Usually this is just to chalk up one of the 6 required races to get an overall position in the series, as my legs are still trashed from London. However this year having not gone through the marathon at anything like 100% effort the recovery was a lot swifter. That said I was fully expecting a quickish start (the first mile is all downhill!) followed by a rapid decceleration and hang on for the majority of the 4.5ish miles. My first mile was quick in 5:21 but so were quite a few others, leaving me in around 7-8th place at the bottom of the first of the two big climbs. Miraculously my legs were better going up hill and I had got passed around 3-4 people by the time the top was reached. I think I was in 4th place by this point. I was running with Mike Gregory from Stubbington Green and we had Tom Cully from Southampton in our sights. Mike had the edge over me coming down the hill again through the 3rd mile and we both got past Tom. I thought Mike was away at this point (plus I was still expecting my legs to give up, especially with the slog up the second hill in the last mile!), but I managed to keep reasonably close to him and coming up the final climb I wound him in and got past. I was sure he would reciprocate the move once we got on the flat(ish) section into the finish, but I'd got a big enough gap to keep 3rd place all the way to the line, despite some tricky boggy bits that needed negotiating. 1st & 2nd place, both from Romsey Roadrunners, were well away in front, but I was really pleased with my best ever RR10 finish position so soon after the marathon!

10 days later on Sunday13th May it was time for my traditional London recovery guaging run, the Lymington RNLI 10k. The normal style is to run a fast first 5km to Keyhaven and then have to slow down as my legs remind me that I ran a hard marathon only a few weeks before. In previous years I've done quie well in the race despite the proximity to London, with a win in 2014, 3rd in 2013 and 5th in 2012. Finish position tends to rely very much on who turns up though... The course is lovely, being multi-terrain including a couple of miles along the Keyhaven & Pennington Marshes seawall.

At the start there wasn't anyone massively quicker than me visible with local runner Adam Jundi and Totton Runner James Dean being the likely competition.... 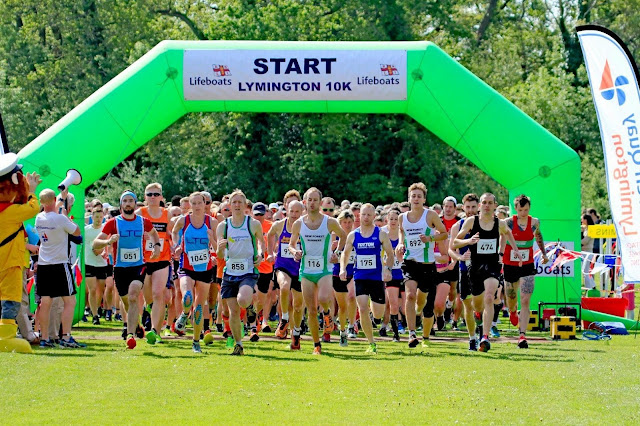 We got through the first 2 miles are a clippy 5:29 pace with myself Adam and James at the front by the time we hit the gravel track on the seawall at Keyhaven harbour. At that point Adam decided to push ahead and my legs couldn't respond, James went after Adam, leaving me in 3rd.

Which is how it stayed until we got into the last half mile, then I realised I was slowly creeping up on James and by the time we turned back into Woodside park with around 400m to go I was getting close. After a couple of hundred metres across grass the course pops through a gap in a hedge and into the finishing area. You then have to run up to an oak tree, do a near on 180 degree turn around said tree and then it's less than 100m straight to the finish. Approaching the tree I was really close to James and by taking the 'racing line' (wide in-hit the apex-wide out) I nipped past and into 2nd place. Unfortunately I didn't have enough sprint left in my legs and James squeezed back past to beat me by a second. Still a 34:30 clocking was great for the course and Adam was only 10 seconds in front at the line, so it was a good close race in the end.

Over the first May bank holiday we went on the first of two family camping trips in May, heading down to The Purbecks for a long weekend camping at Norden Farm (great farm based campsite close to Corfe). I got the oppotunity to get in a great 16 mile mostly trail run trhough Corfe to Chapman's Pool on the coast, along the South West Coast Footpath to Kimmeridge Bay and then back inland via corfe again. It wa a stunning day, but fairly warm and with some fun hills to climb, especially on the coast path! I took some video along the way and will hopefully get it uploaded to YouTube soon....

May had another very important event.... Some time in late 2017 Penny Malcolm called a semi-secret meeting of like minded people one evening in The House Martin pub in New Milton. The agenda? How to satisfy the thirst of various small children to run 2km quite early on a Sunday morning! Our children love doing junior parkrun on Sunday mornings, but the closest to us are either at Moors Valley Country Park or Riverside Park in Southampton, both at least a half hour drive away (which makes it an early start, especially with multiple children!). So a plan was hatched to bring junior parkrun to the local area. A proposal document was drawn up suggesting using the Trim Trail at Fawcetts Field recreational ground and send off to New Milton Town Council for consideration. We had more meetings in The House Martin and got in contact with our local parkrun Ambassadors, Malcolm White & Tamsyn Smith, who provided masses of help and guidence. A list of core volunteers and potential Run Directors was put together. We got in contact with New Forest District Council's Jamie Burton (Physical Activity & Partner Manager) who quickly offered for the Council to cover the start up costs, so we had one major hundle cleared early on 😁

At a meeting of the Town Council Amenities committee in January we got the seal of approval to use Fawcetts Field. From then on the parkrun UK HQ new event delivery system swung into action. Fast forward to 12th May and we were stood in Fawcetts Field running a dress rehersal event to check all the plans were good. All went well, so on Sunday 20th May we started the first official New Milton junior parkrun with 62 children completing the 2km 2.5lap course around the Trim Trail. It was a hugely satisfying moment and quite emotional, definitely the best running event I've helped organise and better than breaking the 2:30 marathon mark in 2017! 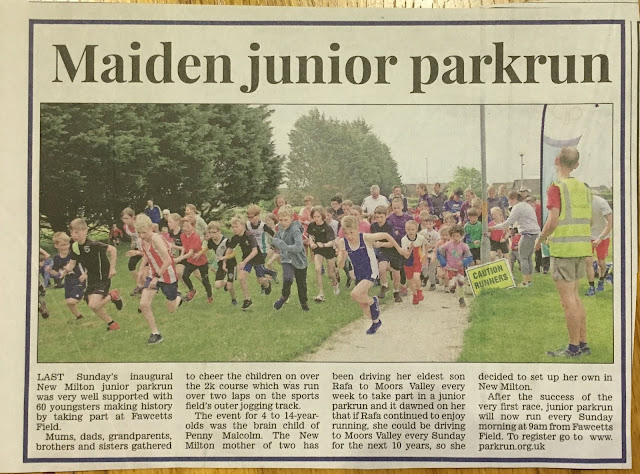 By the end of the month I was ready for camping trip number 2! Before that though I had a 3 night work trip to Cologne, Germany. Staying in the city centre there was plenty of miles of Rhine River paths to explore on the run (run tour video coming soon!).

Our second camping trip was for the half-term week staying at Treyarnon Bay Campsite in North Cornwall near Padstow. Weather was pretty good and I got some nice runs in, no focus on mileage/training, just getting out when the chance arose. I did do another nice SW Coast Path run with 12 miles from Treyarnon Bay to Padstow via Constantine Bay, Trevose Head, Harlyn Bay, Trevone Bay and Stepper Point. I video'd bits of the run again but this time in more of a "vlog" style with a bit more talking and reviewing of the Inov8 Parkclaw 275 GTX shoes I was waering as well as a Salomon Advanced Skin 3 ultra vest. Look out for a post with this soon too!

I'm really stoked to announce that I'm being invited to join the Alton Sports Ambassador program 😎 The program is designed to celebate local runners and their achievements, For me it means getting to try out bits of new kit, taking part in some interesting events and generally help promote running in the local area. Alton Sports have stores in Alton, Four Marks, Farnham and Eastleigh (very close to my work, so I'm in there a fair bit!), I can highly recommend popping in to see them if you're in the market for any running kit, especially for shoe advice. They are a lovely bunch of people, really enthusiastic and friendly!

As an Ambassador I've already been up to the site of this year's Reading Endure24 event (Alton Sports Blog Post all about it) with Mizuno to preview the course and try out some trail shoes. I'll be running at Endure24 on 9-10th June as part of a Mizuno/Alton Sports team. I’ve heard great things about this event, which is described as the ‘Glastonbury for runners’. The aim is to complete as many 8km laps in 24 hours in teams of 1(!) to 8. With be very tiring I'm sure, but I'm really looking forward to it!


After Endure I'll  be running the Serpent Trail 50k race on the South Downs in early July and also have the Salisbury 5-4-3-2-1 50k trail race on the radar. I plan to run both of these events competitively, which means I’ll need to start getting some more time on my feet on the trails of the New Forest and up some decent hills! I'll be planning in an ultra run-to-work (c.27miles) as some point, since the New Forest is so dry at the moment and the mornings are very light.


Of course I'll be continuing to don my New Forest Runners vest and taking part in more of the excellent RR10 club cross country series on Wednesday nights through the summer. However, the focus of the summer is to relax more before potentially building for an autumn marathon, with either the  York or Bournemouth Marathons being options in October....