My first London went to plan very well. I was at the start way too early, but at least the train ride from Charing Cross was quiet! Saw the rest of the New Forest crew for a quick pre-race photo and then wished them all good luck as they were all in the Champs start.

Got a great start at the front of pen 1 on the blue start (over the line in 30secs or so from the gun) and paced the first miles with Steve Morton (New Forest). We were joined after the red start merged with the blue by Chris Brobin (Southampton AC), who I'd met during the Mad March 20 down in Christchurch. The atmosphere on the majority of the route was fantastic, rounding Cutty Sark and crossing Tower Bridge were the big highlights. Caught a glimpse of the elite women running westwards at mile 22 as I passed half way in  01:21:37 (just inside my 02:42 max pace limit). Also picked up my sunglasses (left in brother's flat) in a sleek pit stop manoeuvre with my wife :-) 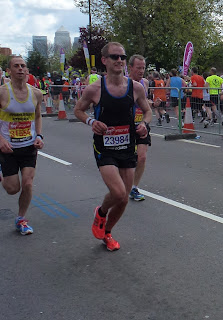 Ran around the Isle of Dogs pretty consistently, but my feet were really starting to burn, which was off putting. My quads started to tighten from about mile 20 and I managed missed the mile marker at 21 completely (under the bridge as you turn off Popular High St?) and that threw my watch splits out. Upside was that I got to mile 22 a lot quicker than I expected!  The final few miles were a battle with my quads which were screaming at me to stop, my margin for getting under 2:45 was only 1-2mins so I had no choice other than to push to keep the pace up. I really want to enjoy the final stage of the race up to Big Ben and through Westminster, but it felt like just me and my legs on their own. that said the several thousand cheering supporters were still in the back of my mind. The final drag up birdcage walk was horrible, 800m, 600m and finally 400m to go just before Buckingham Palace and final turn right to see the finish line a few hundred yards away, it looked like a mile! I kept going and didn't believe I was going to come in under 2:45 until I was 50yds from the line.

I finished almost perfectly halfway between my two pacing limits in 2 hours 43 minutes and 33 seconds.  A PB by over 12 minutes on my 2011 Abingdon time. Overall aerobically I was fine, the gel plan (8 in all) worked really well and I tried to make sure I was drinking enough and regularly. In the end it was muscle fatigue that put the brakes on, thankfully it wasn't so bad that I couldn't hold the pace required. Here's a link to my Garmin race data if you're interested. Now got a good idea of what my marathon HR is (around 165) and it only started to drift upwards in the last 2miles.